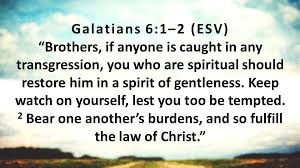 Do You Build Up Or Tear Down Your Brothers Or Sisters? PT1

Galatians 6:1 New International Version (NIV)
Doing Good to All
6 Brothers and sisters, if someone is caught in a sin, you who live by the Spirit should restore that person gently. But watch yourselves, or you also may be tempted.
Relate to those around you
Help restore those who slip
In so much, you will bear their burden also
But in your ministering, do not become weary

Someone is going along in life, and they fall into some sin. The idea here is that sin has captured them. It's not so much that they had deliberately planned on sinning, and executed their plan. As if they had been repeatedly warned by their godly friends not to go there, but they did anyway. The picture here is that someone has acted, and before they really realized it, they had fallen into the sin. And now they had been caught.

Paul, here, is instructing those in Galatia how to respond to such a one. He says that they should be "restored." Rather than pointing out the sin for all the world to see, the sin is to be confessed and relationships are to be mended

Topics: build up your family, Do not "judge" those who stumble, help, live as Christ, minister to those
« Honoring The LORD With Your First Fruits/Wealth Do You Build Up Or tear Down Your Brothers and Sisters? PT2 »
Scroll To Top